Between sleeping 3-4 hours a night, going to kung fu, eating lots of crap and getting wacked out of mind a few times, going to TIFF wore me out. Even when it was over, I still didn't sleep, and didn't really rest, and eventually my body gave out. I got sick. I dad to take a day off of work, and even now, a week and a half later, I'm still sporting a sore throat. I know pity me, watching 30 or so movies over the course of 10 days is a hard life. But it got me thinking. What if I didn't wear my body out. What if I caught something from watching so much cinema, somekind of celluloid virus.

It's transmitted through sight. Somehow, much like Sadako and her transmission through videotape, this virus can only be transmitted when the image is projected on a screen. From there, the viral photons enter you retina, which is of course the most vulnerable part of the human body, giving the virus direct access to your brain. It quickly enters the nervous system, disrupting it, and spreads like wild fire through the body via the blood stream. Soon, the celluloid virus has a grip on you, 'le grip' as the French call it, and you collapse from exaustion. Your cells are forced into a repetitive cycle of viewing their own replication an infinite number of times, until they give out. The endoplasmic reticulum collapses. Your mitochondria become disrupted. There is no mitosis, or miosos, or osmosis. DNA and RNA form into one chain of mutated horror. The RDNA. If you don't get bed rest, you will die.

There is no cure. So please give generously to the celluloid virus fund. For inquiries, please email limeyninja@hotmail.com.

A common misconception about film is that its the perfect medium for robots. They can sit, for days on end, no need to eat, sleep, or urinate. They can watch a James Bond marathon without even blinking, and yet for a normal human being, that would be almost impossible to complete. Very few people could endure both the feat of physical endurance it takes to watch 40 odd hours of film and even fewer could sit through that much Pierce Brosnan and live to tell about it.

But there is a flaw with this mode of thinking. Yes robots have infinite patience and endurance, and many have the intellect to analyze a film on many levels in a nano-second, dissecting it, computing numerous theories about it's meaning and its cinematic audacity, or lack there of it. However, robots don't have feelings. They don't have the capacity to experience films on a visceral level. They may know the meaning behind a film, and they may understand that the structure of editing contrasted with the musical score and cinematic style is suppose to elicit a certain response from the viewer, but they can't feel that response, and therefore, cannot understand the true power of film. The power to move people.

The film festival ended two days ago and I'm still tired. I planned poorly. I went to most of the midnight madness films, getting home between 3 and 4 am each night. I would then be sitting in the theatre again by 9:30 the next morning. I had three nights in one week where I had only 3 hours sleep. By friday, I was in a daze. Everything became a blur. Days didn't exist anymore, as I would sleep a few hours at night, then maybe an hour or two in the day. It was just one continuous mash of film, food and power naps. But I miss it.

JCVD - I cried. It was amazing. Thats all I need to say.

Detroit Metal City - While the message of the film is uber- cheesey, two things make this a comic gem. The first is Ken’ichi Matsuyama's performance as Soichi Negishi, which is completely over the top and utterly breathtaking. The second is Toshio Lee's direction, which transforms the repetitive stream of jokes into an original blend of hilarity and insanity.

Sauna - A brooding, existential finnish horror film from the director of Jade Warrior, it is deeply unsettling, and the ending will stay with you long after you exit the theatre.

Hunger - Visual artist Steve McQueen's take on Bobby Sands hunger strike while imprisoned by the British during the reign of Margeret Thatcher. Visual amazing. Fassbinders performance is terrific. The static long take of Fassbinder and Liam Cunningham as Father Moran discussing the ramifications of such a hunger strike is a thing of beauty.

Daytime Drinking - A Korean indie film about a guy that goes out to the country to meet his friends and get drunk, only to discover his friends won't be showing up. He spends his days wandering the countryside, drinking lots, getting into antics with the locals. This is probably the biggest surprise I saw at the festival. It was very very funny.

Vinyan - Like Sauna, another unsettling film that will stick with you long after you leave the theatre. I loved Du Welz previous film Calvaire, and Vinyan is just as effective a film. The cinematography is stunning, and established Benoit Debie, who also shot Calvaire and Irreversible as one of my favourite cinematographers.

Martyrs - I could say a lot about Martyrs, but I won't. I loved it. I loved every minute, every second. It will offend a lot of people. It holds nothing back. But it is an incredible experience. The less you know about the film the better. It starts like any other revenge tale, the heroine killing the people that kidnapped and tortured her, but then it goes places you couldn't possibly imagine. Places that will upset and disturb you. This is the kind of film that makes living worthwhile, and makes me remember why I love cinema. 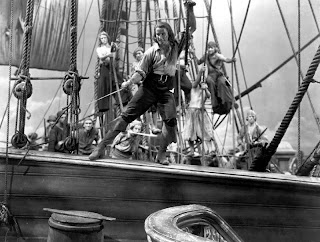 Its day 6 at the festival, and I think I've finally gotten sick of the whole, piracy, pirates, rrrrrrrrrrr routine. It was funny last year. It's funny at a midnight madness when everyone does it. But at every single screening, it really becomes annoying and not very funny at all, although I'm sure the person doing it thinks he/she is frickin' hilarious, and not just a jackass.

On a more important note, JCVD is still the best thing I've seen. Although Vinyan, Sauna, Hunger and Still Walking are all equally amazing, they just didn't have the same emotional impact that JCVD did. Although the ending of all four does really stick with you. 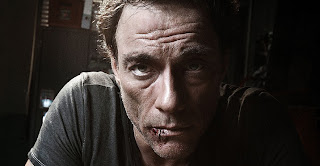 I'm still in shock from my viewing of JCVD last night. It will be hard to see a film at TIFF this year that is better than this. But hopefully I will be pleasantly surprised. But could a film starring Jean Claude Van Damme as himself really be that good? Yes, its that good.
From the 5 minute, one take, opening action scene to the tear jerking climatic 7 minute monologue, Jean Claude delivers. The film works not only because the acting is top notch, the script and direction clever and original, and not only because you identify and empathize with Jean Claude in the movie, but also because you empathize with Jean Claude the man. And while this is indeed his comeback movie, this could be the peak of his serious acting career. Maybe.
You see, during that monologue, which he wrote himself, and which he literally pours he real heart and soul into, he isn't so much acting, as he is giving a candid diatribe about the ups and downs of his life, addressing not a character in the film but the audience directly. Its sort of like those reality show monolgues when people breakdown, spewing their guts, crying, venting. While there are ALOT of comparisons between this and 'Being John Malkovich', it should be noted that it also shares ALOT in common with 'Funny Games', from the breaking of narrative as Jean Claude speaks to the audience, down to the cathartic action ending that we are quickly denied. And while this makes THIS movie amazing, it maybe hard for Jean Claude to capture that same emotion that he did here. Its easy for him to play himself as long as he holds nothing back, but if it comes down to playing someone else, well, that remains to be seen. 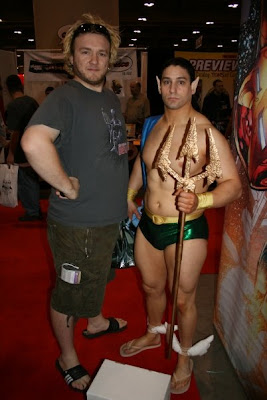 Namor, champion of the sea. He was one of many engaging characters at the Fan Expo last weekend. My companion Gregory, Duke of Yorke, featured in the above photo, was captured with a plethora of our costumed friends. 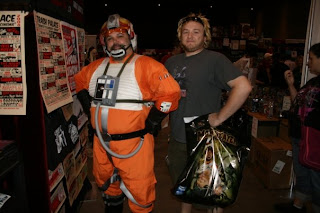 There was of course everyone`s favourite Star Wars character, Porkins. Greg insisted on having his picture taken with every Star Wars character we saw. We never got our hands on a Darth Vader, and we had to chase down the lone Han Solo, but I think the crowning achievement of the expo was Porkins. I mean, that guy actually looks like Porkins! 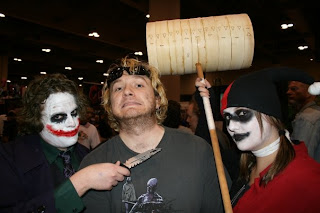 There was a variety of Jokers at the expo. Most tried in vain to emulate Heath Ledger in The Dark Knight. Some, like the one above, weren`t too bad. Others smeared a bit of make-up on their faces, thinking that if its messy it some how captures the spirit of the Joker. Wrong. Most were crap. 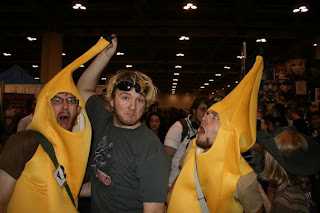 And then there were banana`s.
The costumes were great. The expo, well, was a little disappointing. Yes, it was immense. Yes, there were A LOT of vendors, A LOT of things to look at, and A LOT of guests, but, at with vendors such as Zellers, and Blockbuster selling, well, things they normally sell, I wonder whats the point. Whats the point of selling DVD`s, anime and manga that you can get any day of the week for the same price. Besides a sale or two, what the vendors sold really wasn`t any different from what they normally sell. I was hoping for something rare, or some great deals. I did get a good deal from Cinema One, who was selling Tartan`s DVD`s for $8.99, so I got a bunch, but thats only because Tartan went belly up, not because Cinema One was doing something different from what they normally do. I wanted to find rare and exotic manga, but all I saw was the same old Naruto, Death Note and Lone Wolf and Cub.
On a side note, one of the highlights was trying out Wii Fit, which has now jumped up on my list of things to get for my Wii. It was frickin`sweet.
at 2:49 p.m. No comments: