I'm only watching films on Blu-ray this holiday season. Equipped with a blu-ray player, 60" LCD TV and a surround sound system at my parents, I have made a fort in the basement, and from their continued my film consumption.

Public Enemies - I'd seen this in the theatres. It's typical Michael Mann. The musical score sounds like he pulled it straight out of Last of the Mohicans. There's some intense gunfights. And for the most part it looks pretty. It was shot in several different formats, all Sony cameras, ranging from the F35 all the way down to the EX3. And while using the little EX3's allows him to do things with the camera he couldn't otherwise do, and it lends a sense of immediacy to some scenes, and it allows him to shoot in some really low light situations, the shift can be jarring. Its not so bad on Blu-ray. It was alot worse in theatres when the image was blown up. Now only a few shots look grainy as shit. All in all a pretty good film, even if it gets really cliche in parts. Not Mann's best, but not his worst.

Star Trek vs Star Trek - In the past two weeks I've finally seen both Star Trek films. I watched JJ Abrams crowd pleasing romp first, and then a few days ago watched the original motion picture, something I'd only seen in short bursts up until now. My thoughts? The only Star Trek I really got into was Next Generation. I was never a big Trekkie. Jonathan Frakes made terrible films. But the one thins I liked was that Star Trek was more straight up sci-fi as opposed to Star Wars, which was all about high adventure and massive battles. Star Trek was more concerned with deeper philosophical arguements, and by the time Next Generation hit, authenticity about how things in the Star Trek universe would work. The original film, with all its carbon units, was pretty damn great. Sure the special effects don't stand up, but everything else was everything I expected and more. It had deeper philosophical meaning behind it, and allowed itself to take its time. It didn't try to wow you with its visuals, although some of the more psychadelic 2001-esque visuals are still breathtaking. Abrams on the other hand wanted to get bums in seats, and make a films that was somewhere between the original motion picture and Star Wars. It is entertaining, but nothing more. It doesn't make you think. I don't think I'll ever watch it again. But then again, I ain't an Abrams fan. So if they are to do battle in deep space, I will but my money on Shatner.

Terminator Salvation - The Terminator series should have ended after T2. T3 sucked balls. And this new incarnation, while action packed, is a vapid mess. I love me some giant robots. And that was almost enough to cover up the massive plot holes, but once the film was over, I found myself asking numerous questions. Why is the resistance comprised of 3 men that live in a submarine? How did Marcus survive a massive blast at the beginning of the film unscathed? (Yes, he could have survived, but he would have been sans skin.) If it was so easy for the chopper to enter Skynet to get John Connor out, why did they never mount an assault, because there was absolutely no defenses. If John Connor exists, wouldn't he know that he is successful in sending back Kyle Reese (Adam at work pointed that out before I saw the film). Is it possible to do a heart transplant in the middle of the desert with very little technological resources? They do very little to sort out all the time travel convolution. In fact, they do very little to move the story along, save some big explosions. It is a colossal mess. Which is sad, because I put my money on this over Abrams Star Trek, and I lost. At least he had the brains to use timetravel wisely.

Watch this. Funniest KO ever!

My 2 weeks of fun and relaxation have begun. Which means my immersive experience in film is about to take another leap forward. But will it bring? 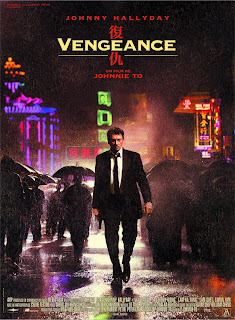 Vengeance - I'd heard mixed films about the film, but it's Johnnie To, and when does he make a bad gangster film? Well, apparently never. I absolutely loved it. His attempt to seek both the usual Johnnie To fans and a broader international audience may not have the end result they were seeking, but his take on vengeance is pretty stunning. Its almost a companion piece to Exiled, using Macao as a backdrop, playing out almost like a western, and having some of the same Johnnie To stock of actors playing almost the exact same roles. The shootouts are breathtaking. The script is surprisingly refreshing. Honour amoung hitmen, an aging gangster who's losing his memory due to a bullet lodged in his skull. Its almost like a heroic bloodshed film, without the melodrama. And no one creates gun splatter like Johnnie To.

Le Tueur - It's almost like a planned this, but I didn't. Going from an almost classic re-imagning on the hired gun film with Vengeance to the genre-bending anti-hired gun film Le Tueur was pure syncronicity. Cedric Angers feature length debut is the opposite of everything a film like this should be. Its quiet, its intimate and its in no hurry to get where its going. Kopas arrives in Paris with one thing on his mind. To kill a man named Leo. Then the games begin. A cat and mouse game that isn't really a cat and mouse game. A car chase that isn't really a car chase. Leo knows someone is after him, and his paranoia grows, until he does the unthinkable. He confronts his killer, and not only does he talk to him, but he embraces him. And its this embrace that helps break down the walls of the cold, distant killer Kopas, bringing life to his otherwise miserable existance. This is a film about a hitman like no other, because its really not a film about a hitman at all. 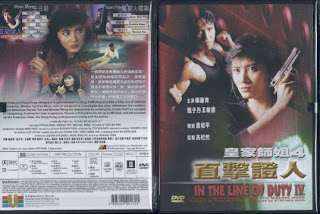 In the Line of Duty 4 - After the disappointing Cung Le fight Saturday night via Strikeforce, I needed to prepare myself for his upcoming appearance in Bodyguards and Assassins. To do this, a searched through the Donnie Yen archives and pulled out one of my favourites, In the Line of Duty 4. More of a Cynthia Khan vehicle than a Donnie Yen film, it still manages to showcase both actors stellar martial arts talents. Plus, it has Donnie Yen's buddy John Salvitti who helped him with the MMA action in Flashpoint, as well as another Yen regular Michael Woods. Plus, its directed by Yuen Woo-ping, so its most definetly filled with some amazing stunt work and fight choreography. It's obvious that during this time Yen was coming into his own, and assembling his crack team of fighters that he would use to great effect in his more recent efforts. All I have to say is, whatever happened to Cynthia Khan, because man that girl could kick some ass!

It's scary carrying around your days footage on a small compact flashcard the size of a toonie. It's scary carrying a hard drive with all your days footage, praying nothing happens until you return home and back it up on several sources. It's even scarier when your footage doesn't play back, and you can't figure out why. But a general sense of relief is felt when you finally solve the problem 12 hours later.

Tired. I'm so very tired. I just want to sleep, to curl up in a ball on the cool hard ground and dream of chocolate and baseball and cute fuzzy animals that talk to me and tell me wonderful stories. But I can't. I'm so tired. All I can do is sit here and stare at the fucking wall. They won't let me sleep. No one will let me sleep. My eyes feel so sore. Sore and swollen.

I wish I could just sleep. I try. But they won't let me. They yell. They scream. They grab me and shake me and scream "Wake up you lazy fuck, this is no time to sleep. This is the time to act. Now get in there trooper and show us what you're made of." But I don't. I can't. I'm so tired. My body won't function. It needs sleep to function. Without sleep, I become useless. A useless robot. I can't function. But they won't let me sleep. They want me to act, they want me to show them what I'm made of.

But what if I'm made of shit, of garbage, or refuse. My brain is mush. My body is inanimate. It remains motionless. Its shutting down. First my feet, then my legs, then my chest and my arms and finally my head.

Not my head! As long as my head still functions, I can see, I can breathe, I can smell and hear and taste. And above all I can think. But without my head, I am nothing. A useless pile of matter. A waste of mitochondria, of cytoplasm, of nuclei. If I can shutdown separate parts of my body at different times, maybe then I can get a variation of sleep. Semi-sleep. Half-sleep. Instead of this anti-sleep. Why won't they let me sleep. My cells are shutting down, performing seppuku. They can't take it, so why should I? At least then they could be used for something worthy, like a cow or a pig.
at 9:26 p.m. No comments: